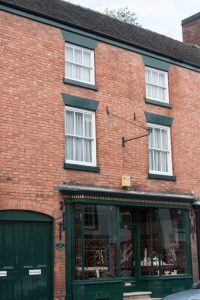 Nos. 21-23 Church Street were part of a late Georgian commercial property, to which a later double shop front was added in the middle of the 19th Century.  At the rear of the shop, behind closed carriage doors, there is a Grade II listed derelict malthouse of 1785. 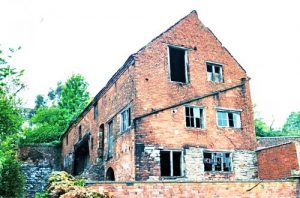 At one time, there were seven malthouses in Ashbourne, which were amongst the largest industrial premises in the Town.  This malthouse was built by Thomas Hemsworth, a local farmer who also owned 3 inns in the Town.   In summer, when malt could not be produced, this building complex was used as a rope-walk for rope making.

During the 19th Century, improved techniques and transport spelt the end of the local malt industry and the production of beer was focused on centres such as Burton-on-Trent.

More information on 21-23 Church Street can be found on the Our Ashbourne website.

A walk around the heritage sites in Ashbourne, including Manion Antiques and its malthouse, can be found in Ashbourne Treasures Town Heritage Trail, which can be obtained from the Visitor Information Centre in Town Hall Yard off the Market Place.

Will you follow the king’s example? This was a question put to the citizens of Derby in April 1915 by the local Temperance Society. The Society lobbied local people trying to persuade them to abstain from alcohol for the period of the war. This was given a boost on April 1915 when the king publicly declared that “no wines, spirits, or beer will be consumed in His Majesty’s houses”.

Other public figures, such as Lord Kitchener, and members of the cabinet agreed to do the same. Derby Temperance Society printed two versions of its pledge, the usual total abstinence pledge, and the “Patriotic Pledge” binding only for the duration of the war.

END_OF_DOCUMENT_TOKEN_TO_BE_REPLACED

This patch of churchyard at St. Edmunds, Castleton, is home to the grave of Elias Hall (1764 – 1853). Can you find the headstone nearby?

In Memory of Elias Hall, the geologist, who died on the 30th day of December 1853 aged 89 years. Born of parents in humble life and having a large family to provide for, yet he devoted himself to the study of geology for 70 years with powers of originality and industry rarely surpassed. To mark the last resting place of one who had worked so long and so hard for the public, a few of his friends and admirers living at a distance have placed this stone

Elias was born in Castleton. His marriage record names him as a “Petrifaction Worker” in Derby. Later he was variously described as fossilist, mineralist, geologist or surveyor in Castleton. He lived in a cottage in Cross Street, now the Greystones shop. Elias produced detailed geological models and strata maps, such as the one below, which is over 2m long when fully unfolded!

END_OF_DOCUMENT_TOKEN_TO_BE_REPLACED 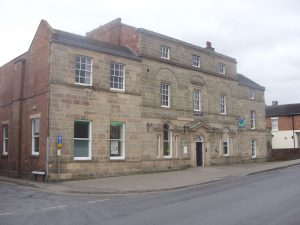 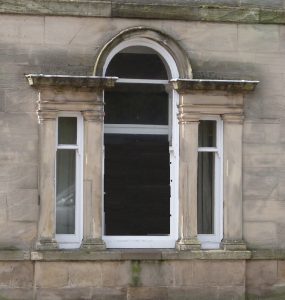 END_OF_DOCUMENT_TOKEN_TO_BE_REPLACED

The Royal Shrovetide Football Game is a survival of medieval street football that takes place every year on Shrove Tuesday and Ash Wednesday.  It is played between Up’ards, traditionally those from north of the river, and Down’ards, from south of the river.  The game is played throughout the streets, alleyways, in the river and the park lake between goals three miles apart.

The ball is usually carried around in a large group of players (the hug), but there are occasional breakaways.  A player scoring a goal keeps the ball but, if no goal is scored, the ball is returned to the “turner up” who starts the game by throwing the ball into the crowd of players.

END_OF_DOCUMENT_TOKEN_TO_BE_REPLACED

Charles Darwin’s grandfather, Erasmus Darwin, purchased this building – The Old Nags Head – in 1793 along with an acre of grounds and a pew in St Oswald’s Church for £700.  He had long criticised women’s education and he intended his two illegitimate daughters to run a school  putting his ideas into practice. 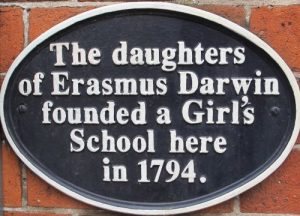 The school’s curriculum included scientific subjects as well as modern languages.  Erasmus encouraged exercise, was against stays in a young lady’s dress, and believed that students should be governed by a teacher’s mind and not by strict discipline. Many leading midland’s families sent their daughters to the school.