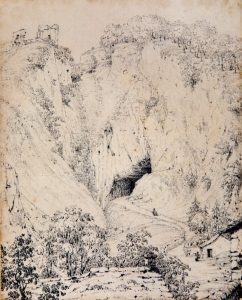 This piece is from a sketchbook by Mary Twopenny that captures her various trips around Derbyshire. It is a pencil drawing of the approach to Peak Cavern from Castleton with Peveril Castle above and is dated 25th August 1827.

END_OF_DOCUMENT_TOKEN_TO_BE_REPLACED 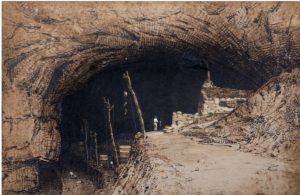 This piece is from a sketchbook by Mary Twopenny that captures her various trips around Derbyshire. It is a pencil and wash drawing of the rope walk in Peak Cavern with cottage in the overhang, Castleton, it is dated 25th August 1827.