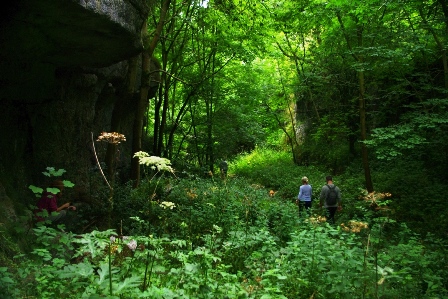 Suddenly the open dale is left behind and smooth limestone cliffs close in on both sides.  At its narrowest point, this passage is no more than ten metres broad.  It is almost claustrophobic.  No water ever flows here these days, not even after the heaviest rainfall. Take a closer look at those rock faces either side of you; surely, they must have been sculpted by a flow of water on a biblical scale.

It is quiet here today – maybe all you can hear are the songs of redstarts and willow warblers in the thorn trees above?  Yet all about us is clear evidence of what must have been a thunderous process; to the left of the path there is an overhang of rock, this is where an ancient river has undercut into the rock-face and, looking up, do you think that there was once a complete roof above?  If so, at some point it must have collapsed, the debris washed away in the powerful torrent.

All of this tumult happened around ten thousand years ago at the end of our most recent Ice Age. A layer of thick ice covered northern Britain but as temperatures warmed and we entered a major melting phase, the retreating ice sheet produced unimaginable quantities of meltwater. Both the ice sheet and its meltwater carved out the steep valleys and rocky landscape we associate with the White Peak.

The same retreating ice left Monyash with a valuable gift, a thick deposit of clay in its hollows. Clay-lined hollows would hold water for wild animals to drink from, perhaps even as the first intrepid human hunters appeared on the scene.

Continue down-dale. The next part is the trickiest to negotiate, as the way is strewn with huge boulders, some of which have to be half clambered over.  Stop at the stile by the large sycamore.

You can experience A Narrow Passage out in the Peak District or Derbyshire by visiting the location marked on the map below, or find it with the help of the Pocket Wonders app.

A Narrow Passage is closely related to other Wonders in the collection.