Spend a few minutes simply taking in the atmosphere of this incredible place; the mossy walls, the clumps of fern, the absence of direct sunlight. There are hidden niches and side-aisles too, so have a good explore. 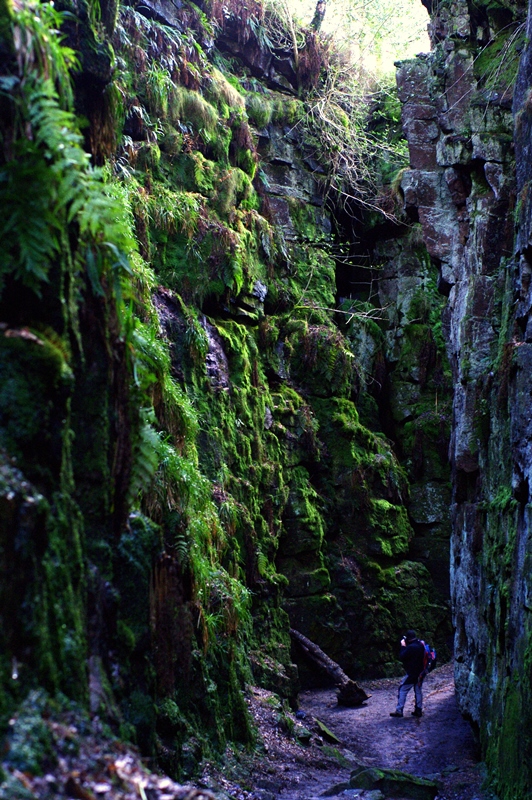 It is not hard to imagine that it must have been a centre for pagan worship long before the arrival of Christianity. There are even signs that modern day pagans revere the chasm, from the little offerings you may spot here and there. It is a deeply hidden place.

Lud’s Church is sometimes cited as the inspiration for The Greene Chapel in the medieval poem Sir Gawain and the Green Knight. Read the poem however and the mysterious chapel turns out to be a grassy burial mound well north of the Mersey. It is true, though, that the anonymous author hailed from this region and many evocative local place names, such as Wildboarclough, find echoes in the poem.

Centuries back this was an ideal hideout for those seeking to do secret business away from the prying eyes of authority. Popular folklore has associated many famous fugitives with this place, including Bonnie Prince Charlie and the ubiquitous Robin Hood. One person we know visited here was William de Ludbank. He was arrested here in the fifteenth century and this event most likely gave Lud’s Church its name.

William de Ludbank was a Lollard, a religious dissenter. In an era when church services were held in Latin, among other objectives, the Lollards wanted to worship and read the bible in English. This place was almost certainly an improvised and secret church for a group of Lollards. They liked their churches simple and unadorned, so this would have suited them very well.

A century later, after the Reformation took hold and the Church of England was established, holding a mass in Latin became a capital offence. Who knows, perhaps in their turn small congregations of Roman Catholics met here for Latin mass?

One thing is for sure, the sound of voices singing hymns in these echoing depths must have been mesmerising, whatever the denomination. Why not give the acoustics a try for yourself?

Next, proceed slowly through the chasm, emerging at the far end along the main path. About half way up the exit route, turn around to take in the view of Lud’s Church from this other angle.

You can experience Inside Lud’s Church out in the Peak District or Derbyshire by visiting the location marked on the map below, or find it with the help of the Pocket Wonders app.

Inside Lud’s Church is closely related to other Wonders in the collection.