This is a fine place to view the lower portion of Dovedale. Opposite, rising out of the ash woods, you can just make out the rock pinnacles known as the Twelve Apostles.

Pinnacles like these are made of harder bands of limestone that were left were behind after the erosion of the last Ice Age. Over the centuries since then, they have been further shaped into craggy towers by water gradually dissolving the rock or repeatedly freezing in cracks until the rock weakens and crumbles away. 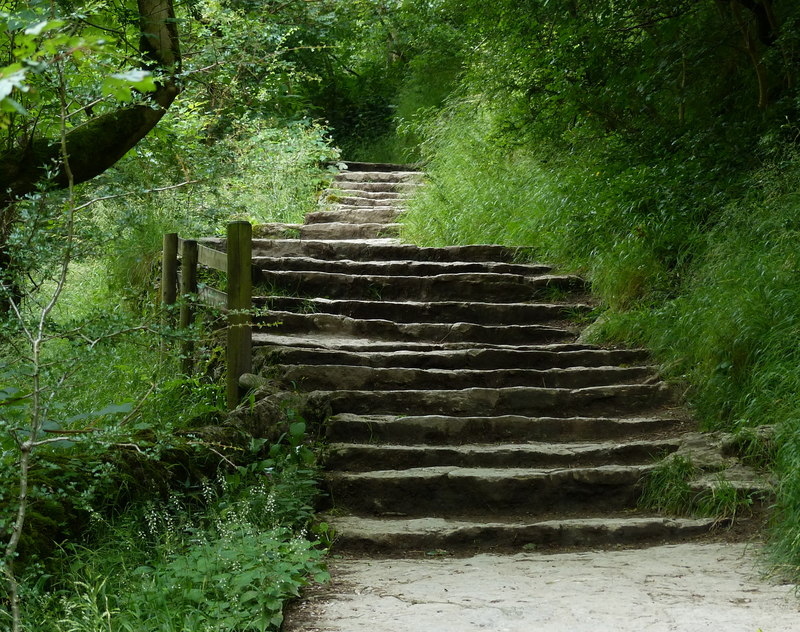 Steps up to Lover’s Leap © Matt Fascione via Geograph (CC BY SA 2.0)

Lover’s Leap gets its name from a girl who attempted suicide from this high point, but was saved by her billowing skirts! The steps up to the high point were said to be built by Italian prisoners of war during World War Two.

Dovedale’s ash woods – now threatened by ash die-back disease – are nationally important and support the rare pink-flowering shrub mezereon. The limestone here produces an alkaline soil which is perfect for these plants. Again it is this humble grey rock which is responsible for the fascinating features we find in Dovedale.

The thickly-wooded nature of this part of the dale often obscures the views of the natural rocks – a relatively recent phenomenon since grazing was removed from the dale. Photos taken in the late 19th-century show much more of the rock formations; the reason why a winter or spring visit to Dovedale can be so rewarding.

Follow the steps that lead down through the trees from Lover’s Leap past the barely visible, yew-clad needles of Tissington Spires over to your right. A few steps further on and high up to the right you can see the natural arch of Reynard’s Cave. The more adventurous might want to scramble up the steep slope to reach it, but it is slippery and eroded, so take care.

This text was originally developed by Roly Smith for Discovering Britain. Created by the Royal Geographical Society (with IBG), the Discovering Britain website features over 350 walks and viewpoints which explore the stories of Britain’s landscapes.

Roly Smith is a keen walker and the author of over 90 books on the British countryside. He has been recently described as one of Britain’s most knowledgeable countryside writers.

Thanks are also due to Dan Seagrave for use of his photograph of Dovedale and Thorpe Cloud (CC BY-NC 2.0 via Flickr).

Dovedale is managed and cared for by the National Trust.

You can experience Lovers Leap out in the Peak District or Derbyshire by visiting the location marked on the map below, or find it with the help of the Pocket Wonders app.

Lovers Leap is closely related to other Wonders in the collection.