Before we leave the magic of Lud’s Church completely behind, we ought to consider how such an extraordinary feature came to be. Of course, there is a folk tale involving the Devil making a giant gash in the earth with his finger nail.  More logically, can you find any signs of erosion, by water for instance? 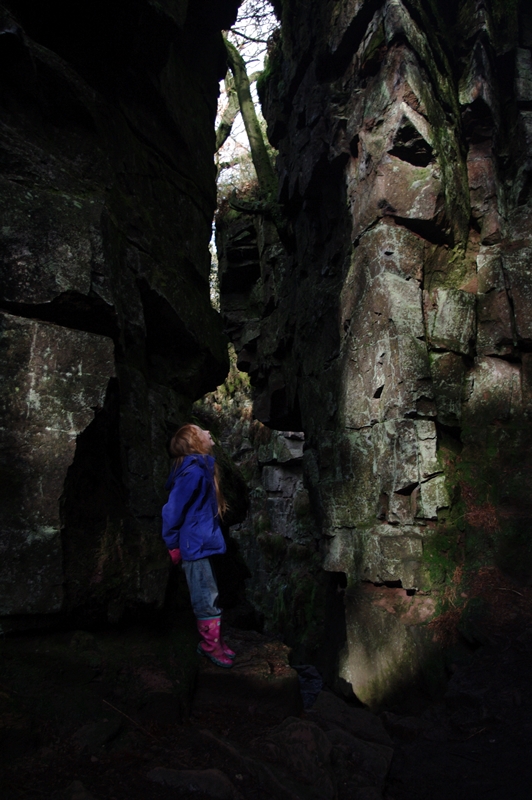 This in no way looks like one of those small, water eroded cloughs. In fact, there is no sign at all that a stream has ever run in or out of here. For the record, Lud’s Church is around 17 metres deep and 100 metres long. The sides may be jagged, but they are straight drops of gritstone, draped with cushions of soft moss. There is not much of an eroded look about them.

Think back to the wider picture, though. The River Dane managed to find a passage through the hard gritstone wall of the Roaches somehow. There must have been a weakness. In fact the gritstone of this whole area is traversed by numerous ‘faults’ – cracks inside the rock. These run northwest to southeast, just as Lud’s Church does.

Where the bed of gritstone dips to the north, into what is known as the ‘Goyt Syncline’, a large mass of it simply cracked away. The rock slipped downhill a few metres, breaking along one of these fault lines. This sudden movement under the force of gravity opened up the chasm as we see it today.

It is thought that the event happened after the last Ice Age, perhaps around eight thousand years ago, but it cannot be dated precisely. Whenever, it was very recent indeed when you think about the age of the rock itself.

It is tempting to imagine a party of prehistoric huntsmen lying amongst the heather, enjoying an afternoon nap in the sun, when all of a sudden the hillside moved beneath them… How very tentatively must they have crept into the newly opened chasm, full of wonder. There, no doubt, they invented the first of many incredible tales…

To return to Lud’s Church car park, exit the chasm and turn to your left on a small path. On reaching a larger path, turn right for a scenic walk through the forest. After about half a mile, take the path which turns back into the forest, left, and gradually downhill towards Black Brook. Cross the footbridge once more and go over the stone stile.

For an alternative and less muddy walk back from here, take the track through the fields signposted “Scout Camp”. Don’t worry, this is a public footpath, no matter if it is not signed as such. On reaching the buildings of the scout camp, the public footpath takes an immediate, right-angled turn, up through the yard, to meet a narrow lane. Turn left onto this and you will soon be walking past the entrance to Gradbach Mill once more.

You can experience Lud’s Church exit out in the Peak District or Derbyshire by visiting the location marked on the map below, or find it with the help of the Pocket Wonders app.

Lud’s Church exit is closely related to other Wonders in the collection.