Tell your group to look up the hill to your right. You will see a stone arch and, behind it, Reynard’s Cave. This cave was used by animals and people for thousands of years. Archaeologists have explored the cave and found artefacts from the past.

Would your group make good archaeologists? Try this quiz and see how you do. Press ‘More’ to see the answer and the next question.

Question 1: This looks like it is from something larger, but what is it? 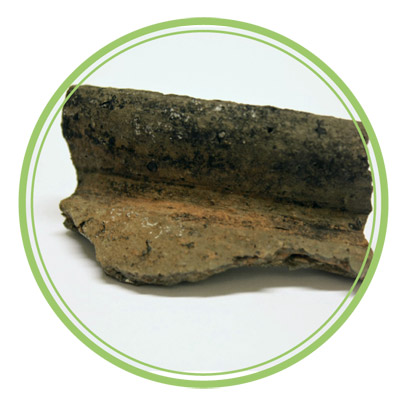 a) Part of a Roman pot rim

b) A fossilised pizza crust

The answer is A. This is the rim of a Roman port. Lots of pottery fragments have been found in Reynard’s Cave. This shows the cave was inhabited by people at different times.

Question 2: Other Roman artefacts have been found in the cave too. This item is a piece of jewellery, but what sort? 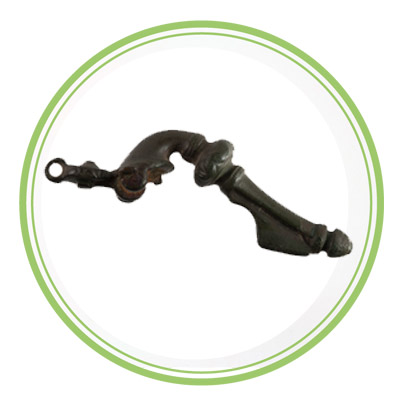 The answer is C. This is a type of Roman brooch called a trumpet brooch. People used brooches like to secure their cloaks – just like a large safety pin!

Now for the final question: Look at this piece of bone with a tooth still attached. Which animal does the tooth come from? Make the sound of the animal you think is the right answer! 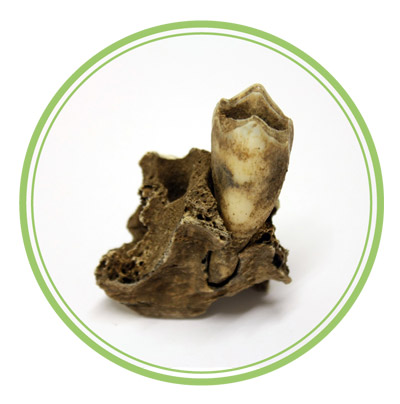 Mooooooooo! The answer is B. People living and sheltering in the cave had to butcher their meat before cooking and eating it. Archaeologist often find pieces of jawbone and teeth in places where people lived.

You can experience Dovedale Family Trail: Reynard’s Cave out in the Peak District or Derbyshire by visiting the location marked on the map below, or find it with the help of the Pocket Wonders app.

The objects below can be found in the Wonders of the Peak exhibition. Each has a connection to Dovedale Family Trail: Reynard’s Cave.

Dovedale Family Trail: Reynard’s Cave is closely related to other Wonders in the collection.