From on the other side of its banks, we can take in the beauty of the River Derwent itself. This river also formed the Matlock Gorge. 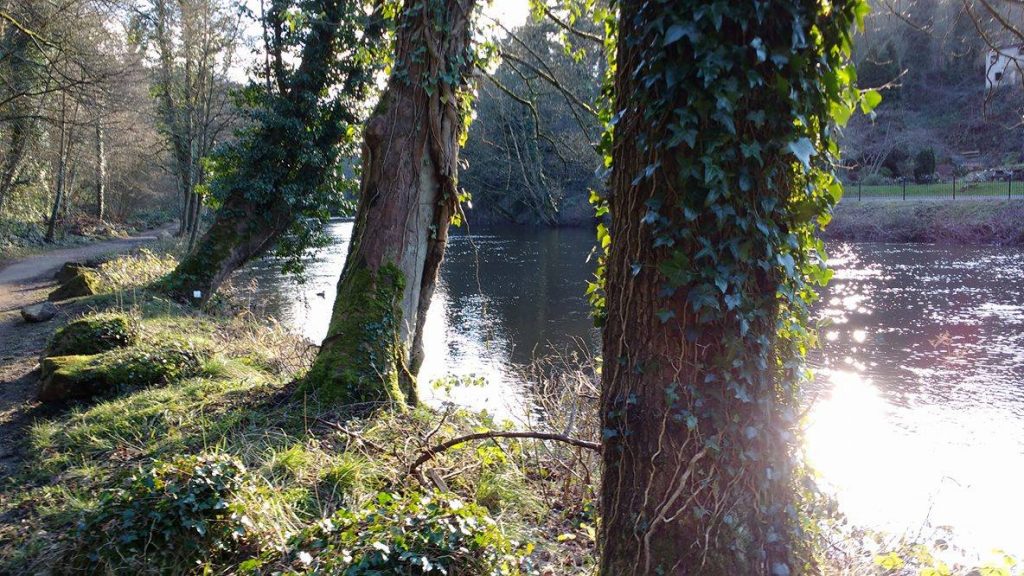 The cliff faces we can see are made of hard limestone, but above them would have been layers of softer rocks – shales and grits. Over time the river water cut through these softer stones in a process called erosion and created the deep valley. Erosion is ongoing and now the water is slowly cutting through the much harder layer of limestone.

The gorge we can see, however, follows a curious route. Instead of eroding through the hard limestone, it makes more sense for the river to find other softer stones to pass through. At some point the river must have changed course.  One explanation is that the river’s course was affected during the last Ice Age. Large glaciers may have blocked its path or forced the river to move by slowly pushing it from the east. Whatever the cause, it left a dramatically deep gorge and plunging limestone cliff faces.

One more change to the river’s course dramatically shifted Matlock Bath’s fortunes. Downriver (to your left) you could follow the Derwent on to Cromford. This small town just a mile away was where engineer Richard Arkwright harnessed the force of the Derwent to power his textile mills. Then in 1818 the gorge was forcibly opened further to create a toll road. This road connected the Derwent Valley with Nottingham (25 miles away).

This benefited the water-powered textile mills that pepper the river banks for miles around.  It also increased access to Matlock and boosted tourism. Though the power of the river carved the gorge itself, people stepped in to complete the route that enabled Matlock Bath to become a bustling tourist destination.

Follow the tarmac path downriver until you reach a small steep trail leading up the gorge on your left. Stick to the path and follow it up the side of the gorge back in the direction of Matlock Bath – be careful as the path can be slippery and muddy after rain. Stop when you reach the black railings overlooking the river. Turn around to face High Tor, a rocky outcrop high above the valley behind you.

You can experience The River Derwent out in the Peak District or Derbyshire by visiting the location marked on the map below, or find it with the help of the Pocket Wonders app.

The River Derwent is closely related to other Wonders in the collection.