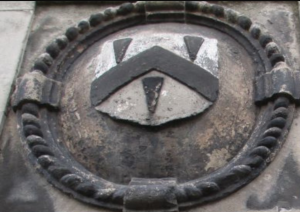 Look at the crest on the end of the Almshouses end-on to the street.  This is a “rebus’ – a puzzle that uses pictures to represent words.  In this case, it is the family crest of the Pegge family, who built these almshouses around 1699 – a chevron between three pegs. They are now private dwellings with one a holiday let. 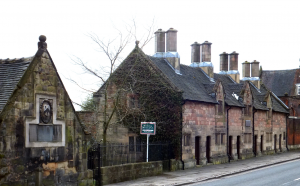 The second group, parallel to the street, is Owfield’s Almshouses, which are still in use as almshouses.  They were built between 1615 and 1625, with a second storey added in 1848.  In a trade directory of 1822, they were described as ‘for aged and broken down house keepers’.  They were restored in 1990 when two houses were turned into one.

A walk around the heritage sites of Ashbourne, including the almshouses, can be found in Ashbourne Treasures Town Heritage Trail, which can be obtained from the Visitor Information Centre in Town Hall Yard, off the Market Place.

You can experience A ‘Rebus’ at the Almshouses out in the Peak District or Derbyshire by visiting the location marked on the map below, or find it with the help of the Pocket Wonders app.