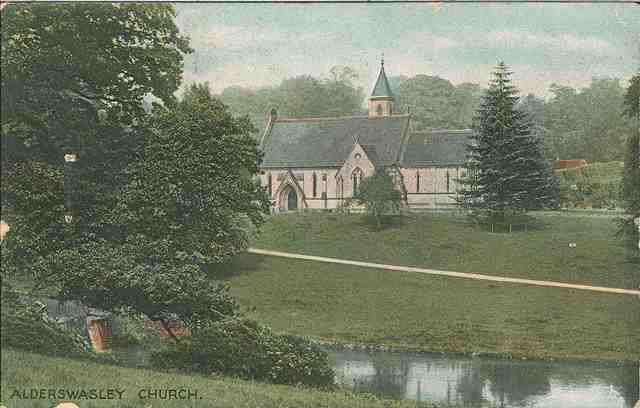 This postcard depicts, All Saints Church in Alderswasley. All Saints, Alderwasley was built in 1851 as a private chapel for the Hurt family, who were local land owners and to some extent industrialists. It was constructed 1849-50 by H.I. Stevens, near to Alderwasley Hall, superseding the chapel of St Margaret. The nearby Alderwasley Hall was originally owned by John Lowe. When John Lowe died in 1677 the estate passed to his son, also called John (1653-1690), who died a bachelor. This meant that estate then passed onto bachelor John’s sister, Elizabeth, who had married Nicholas Hurt. And so Alderwasley Hall became home to the Hurt family from 1690.

Of all the Hurts, Francis Hurt (1781–1854) who was Lord of the Manor from 1801 until 1854, was perhaps the most influential. During his time the Industrial Revolution was racing ahead. He benefitted from this expansion, not least by marrying Elizabeth Arkwright, the grand-daughter of Sir Richard Arkwright.

The stained glass East window and a rose window in the North transept are well worth seeing. The “Brindley and Foster” organ is regarded by well-respected musicians as being a very fine instrument. Given its remote location the church is not open on daily basis, and is open rarely for services. It’s currently managed by the Wirksworth Team Ministry.

More more photographs of All Saints and the Alderswasley area visit the Crich Parish website.

You can experience Alderswasley, Alderswasley Church out in the Peak District or Derbyshire by visiting the location marked on the map below, or find it with the help of the Pocket Wonders app.