Compton is a straight, wide road and an Anglo-Saxon civil boundary between the Domesday townships of Clifton and Sturston. Compton is not in Domesday. This suggests that there was no settlement there and the pre-existing linear feature was used as a convenient boundary. It was a completely separate place and not part of Ashbourne until 1873.

Compton is not only the name of a street but was originally the name of an area. The name Compton (Campdene) may go back to before the Conquest and might mean ‘the valley where a fight occurred’. In the period 875 to 925 Ashbourne was on the border between the areas controlled by the English and the Danes. Derby was taken by the English in 917. So a skirmish around Compton is quite possible. 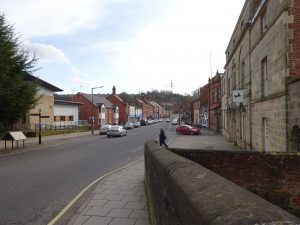 Compton probably owes its existence to the desire of traders in the 1200s to avoid paying tax. Ashbourne had become a market town and burgage plot holders had to pay taxes. It seems that to avoid paying these taxes people set up businesses outside the town in Compton. Ashbourne traders complained to the King’s Justices in 1274/5 about Ashbourne traders being obliged to pay the taxes but the Compton tradesmen were not.

Further information about the Compton area can be found on the OurAshbourne website http://ourashbourne.co.uk.

A walk around the heritage sites of Ashbourne, including Compton, can be found in the Ashbourne Treasures Town Heritage Trail, available from the Ashbourne Visitor Information Centre in Town Hall Yard on the Market Place.

You can experience Compton out in the Peak District or Derbyshire by visiting the location marked on the map below, or find it with the help of the Pocket Wonders app.