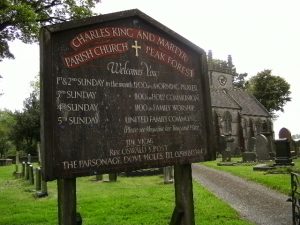 Founded by the Countess of Devonshire in 1657, Peak Forest Chapel was built in the Royal Forest and was extra-Parochial and extra-Episcopal. This gave the incumbent the right to grant – among other things – marriage licences to anyone at any time, with no need for banns or witnesses. Therefore, until the Hardwick Act of 1754 outlawed such practices in England, it was used for runaway marriages. The Chapel’s marriage registers show that it was used by eloping couples from all over the country, though they mostly came from within a day’s ride of Peak Forest.

Because the Hardwick Act did not apply to Scotland, Gretna Green replaced the Peak Forest Chapel as the haven for runaway (“foreign”) marriages after 1754. Only a small handful of “foreign marriages” continued to be celebrated in Peak Forest during the following half century.

You can experience Derbyshire’s “Gretna Green” out in the Peak District or Derbyshire by visiting the location marked on the map below, or find it with the help of the Pocket Wonders app.