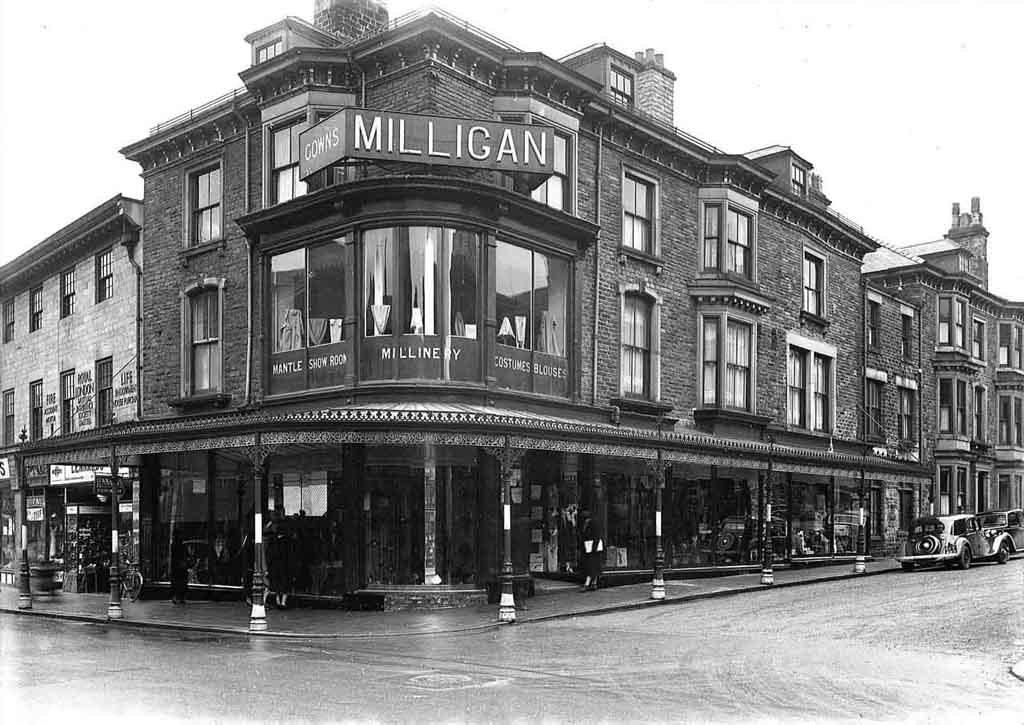 Standing in front of Argos, on Spring Gardens, there’s no trace of E.C. Milligan’s Drapery and Milliner’s shop. The photograph above, taken on 27th February 1940, shows a distinctive building with a colonnade frontage.

Milligan’s was demolished in the 1970s but older residents of the town remember the shop fondly as a high class shopping destination. The shop’s cash carrying system is also remembered. Sales assistants would place payment into round pots to be transported by wires and pulleys to the cashiers. Payment was taken, and change sent back to the assistant via the wires.

Press ‘tell me more’ to hear local memories of Milligan’s.

We asked local residents to share their memoires of Milligan’s, this is what they said:

Keep pressing ‘tell me more’ to find out more about Milligans or to reach a transcript of the audio above.

The shop was established by John Milligan in 1849, who was succeeded by his son, Edward Chambers Milligan. Eventually the business was bought by Arthur James Potter, also the proprietor of Potter’s and Mayor of the Borough of Buxton in the early 1930s.

“Millican’s was quite a posh shop. It was all high class.”

“They were top class. Everything but everything was sold in there but clothes were a speciality for the ladies of Buxton, what have you. It was what you would call a posh, posh shop in other words.”

“It was very, very classy place, rather on the lines of ‘Are you being served?’ The chap that actually ran the place, Edward Chambers Milligan, was a very well-respected chap, but he looked rather like Captain Peacock out of ‘Are you being served?’ and served the function that Captain Peacock did ie a floorwalker and introduced you to various departments within the shop.”

“A shop that you liked going in, it’s very much like Potter’s of today. In fact, I think Mr Milligan owned Potter’s at the same time.”

“In this picture that I’m looking at, it’s got the colonnading round it which was later taken down, but again it allowed people to shop in rainy and wet weather, which for nicely dressed people was quite a consideration.”

“It also had an elaborate way of taking your money where the money wasn’t taken directly from the customer to the assistant. The money was taken from the customer, put in a little cylindrical pot which was connected to a wire. They pulled a cable which took the cylindrical pot to the cashier’s office. There the money would be paid out and the change put back in the pot and sent back by a pull of the wire to the assistant, so no jiggery-pokery could go on regarding the wrong change and all that kind of business.”

“We never had to walk to the cashier, it was straight overhead. I used to like going in, watching that actually.”

“My next door neighbour, who was a lady called Mrs Roach, used to work there. She used to work at Milligan’s and it was considered to be a really good job to have. You know, she can remember people coming in and them coming to her to choose a costume as it was called, so it was never that you came just for your skirt and your blouse or whatever, but you had a costume and you were fitted for it. And upstairs, apparently, was the magnificent hat department, and if you were going to a special wedding you always went there to get your hat.”

You can experience E.C. Milligan’s out in the Peak District or Derbyshire by visiting the location marked on the map below, or find it with the help of the Pocket Wonders app.