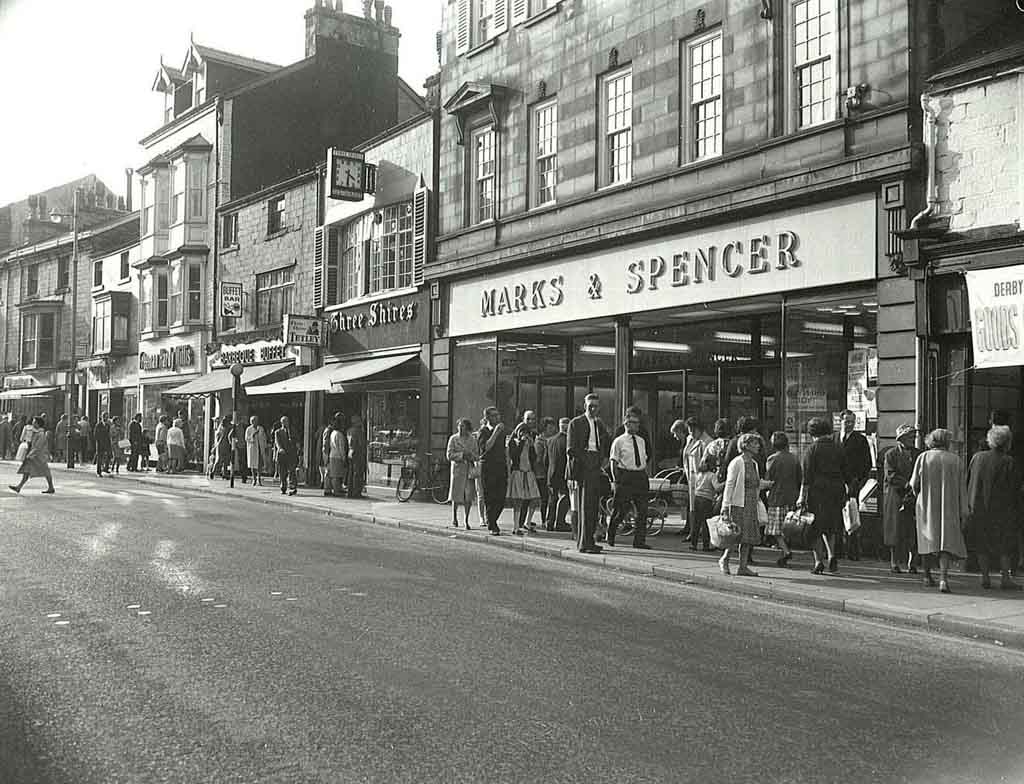 This 1950s view of Spring Gardens shows Marks and Spencer almost unchanged from the view today. The shops to either side had less permanence. The famous brand first started at Kirkgate Market, Leeds, in 1884 and became a common sight on most high streets by the time this photograph was taken. Glamour and style came bouncing back after the constraints of the Second World War with shops like M&S leading the way.

We interviewed some local people about their memories of M&S:

“Now I did hear it said years ago but I don’t know if there’s any truth in it, that there was an unwritten agreement between Marks and Spencer and Woolworths that wherever one situated a store in whatever town, the other one would try and get one near to them as soon as possible. If there’s any truth in that I’ve no idea but it certainly happened in Buxton because Marks came dead opposite Woolworths as you know and they opened about 1933-4 and of course, this was quite exciting to have a large store of that description. When it opened there was considerable competition from the young ladies of the town to get a job there.”

“I did actually work there just one Christmas holiday which would be about 1958. It wasn’t self-service, there were counters in there where you were properly served. I don’t remember anything in the food line other than sweets, and that’s were we got our best dress when we were younger. It was very pleasant. Apparently for the full-time staff they had a chiropodist and a hairdresser, and they all got meals in the canteen there for something like 10p in today’s price – two shillings. A very caring company. A lot of people had been there years. They always had to be called by their maiden name – it was very strict, wasn’t it.”

You can experience Marks and Spencers out in the Peak District or Derbyshire by visiting the location marked on the map below, or find it with the help of the Pocket Wonders app.