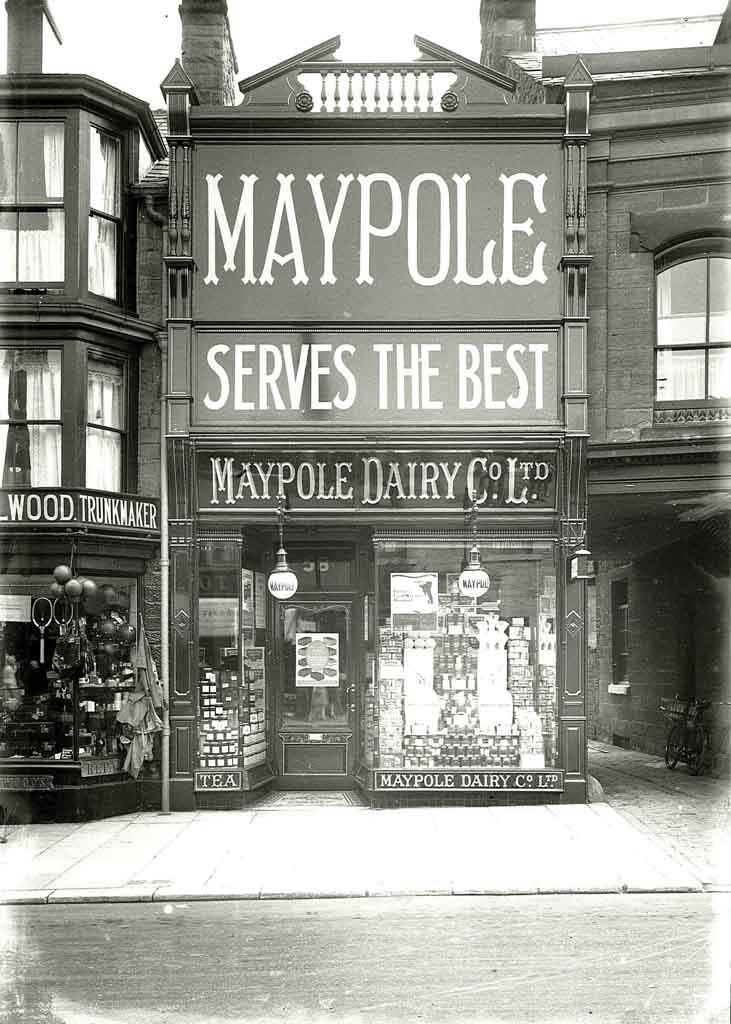 Hear local resident’s memories of the Maypole Dairy below, or press ‘more’ to read a transcript.

An earlier photograph suggests that the Maypole opened in 1900. There are also later photographs from the 1960s so we can deduce that the shop was a stalwart of Spring Gardens for at least six decades. This image shows Maypole Dairy at its most conspicuous and stylish. It promotes itself as a dairy whereas in later times it seems more occupied with selling “coffee, teas, fish and steaks”. It is interesting to see how a business changes its produce with the times.

Memories of the Maypole

(Transcripts of the audio clip)

“It was just a general stores. I used to work at one across the road and it was called Melia’s and it was on the other side of the road to this, and I used to go in after school and you used to weigh butter and you used to, you know, pat it with a wooden, you know, it was a big slab of butter and you kind of cut it down and weighed it and then you had to pat it and shape it and then wrap it.”

“They used to do a good meal in there, sandwiches and things like that.”

“The Maypole was a very good place where they had the butter in great big things and it was cut and packed and everything was weighed out for you. That was a very nice shop.”

“Well I remember the smells as much as anything. We used to buy whatever amount of butter you could afford or you wanted, perhaps merely a quarter of a pound, but they would cut it off for you and wrap it up and it was very nice the way they packed it. It was like wrapping a parcel however small. You were treated as a very important person in those days, it wasn’t sort of take it or leave it. You felt as if whatever you bought, however small or large, it was very important to the person that was serving you. It was so nicely laid out. You could see everything as you went in, you know. You could see all the bacons and the jars, the tins and it was just a very nice shop. You felt very comfortable going in there.”

You can experience Maypole Dairy out in the Peak District or Derbyshire by visiting the location marked on the map below, or find it with the help of the Pocket Wonders app.