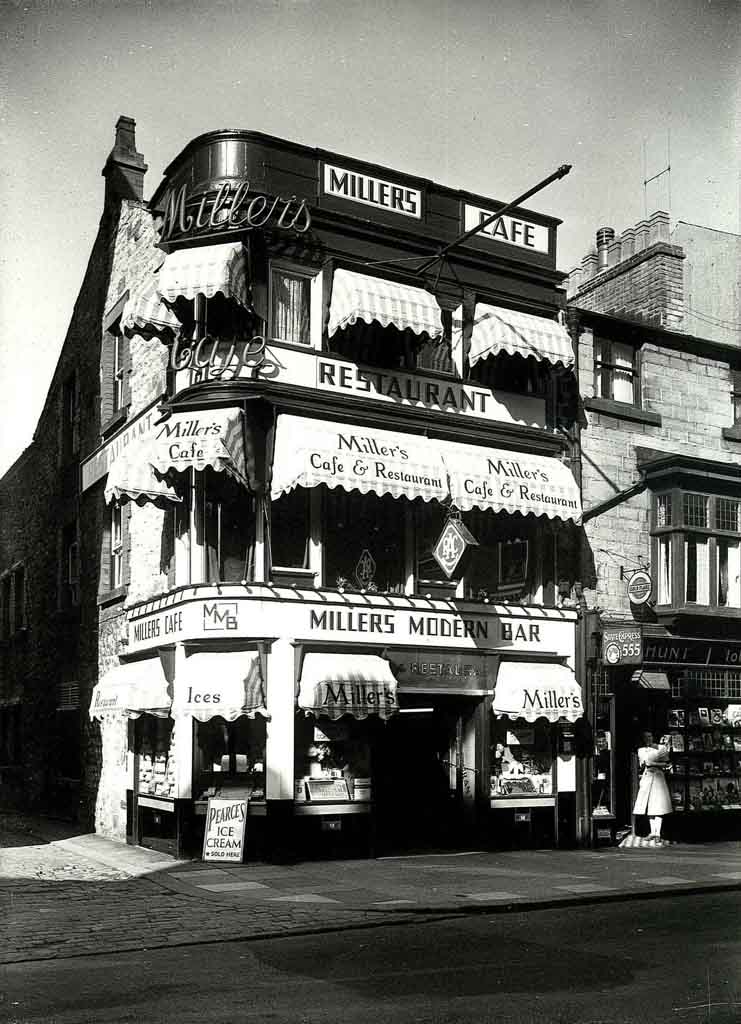 There are references to Miller’s on Spring Gardens as early as 1912 advertising their specialities as “cream candies, home-made toffee, chocolate mixtures, fondants and marzipans”. By 1938, Miller’s had expanded into a three-storey café with rather a grandiose frontage and a light-up sign.

There are photographs in the collection that document a visit from the Wells Dressing Queen in 1938. We can therefore assume that Miller’s was regarded as an significant location in its heyday. They closed for business sometime in the 1990s but had survived, in one form or another, for over 80 years.

By the 1960s, Millers had taken in Hunts the tobacconist next door.

We interviewed some local people about their memories of Miller’s Cafe:

“Oh Millers Café. Everyone went to Millers Café and it was an everyday thing just to pop into Millers and that was where you probably went courting and things like that. It was a general meeting place, it was nice Millers was.”

“Millers café – I remember that being opened. Mr Pollitt, Bill Pollitt opened it and during its life it had several different shop fronts which appeared in some of the books of Langham and Wells about the history of the period. Always very flamboyant.”

“Millers Café existed when I first came here. Right up to the 90s it was still there. It was lovely, it really was, it was a lovely café. You were served at the table and certainly in the 70s you had people in black and white, you know, that came and served you, and the little caps and everything which was great.”

“I was only a youngster really when I used to visit Millers but I used to go with a couple of friends – usually to get out of the foul Buxton weather, which was very often the case – and we’d make a cup of tea last an hour, two hours if we could possibly get away with it, but we were usually thrown back out on the streets. It was very popular place. Another thing I remember about that was the smell of soup. They were always boiling soup up and it was very attractive. I think that was what attracted a lot of people into the shop.”

“I remember now, as a young man my pal and I when we were late school boys, when we were 17 after we left school, we used to go and they had the milk bar. It was the done thing to have a milk shake – that was a bright new thing that had come along then. They were nine pence each I remember and I particularly liked the banana ones.”“I do just vividly remember one occasion when my big sister took me out. She was in the forces and took me out for a treat. I was allowed a milk shake and some orange squash.”

“As I grew into my teens I used to go in with my girlfriends and then we didn’t attempt to go up into the café part. We didn’t go into the restaurant part, we just stayed downstairs where you could have coffee and hot dogs and this type of stuff, you know. We perhaps thought it was a bit fuddy-duddy up there then, but as a younger person I really did like that part, you know. Yeah, it was nice to sit there watching what was going on, watching who was coming in. Everybody seemed to know everybody.”

You can experience Miller’s Cafe out in the Peak District or Derbyshire by visiting the location marked on the map below, or find it with the help of the Pocket Wonders app.