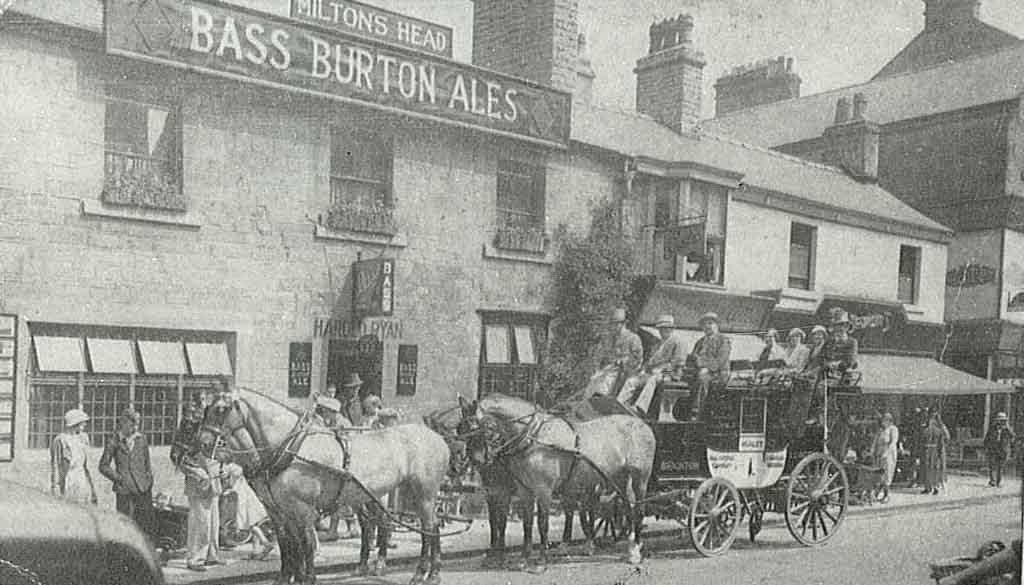 Several local residents share their memories of the Milton’s Head. You can read their stories below.

The horse and carriage parked outside the Milton’s Head gives the impression that this image is much older than 1930. We must remember that car ownership in the UK did not boom until the 1950s so a more traditional form of transport was not an uncommon sight in this decade. It is unclear who the people sat atop the carriage are; bearing in mind Buxton’s status as a popular holiday destination and the fact that they appear to be well-dressed, it seems likely that they are tourists, perhaps stopping off at “the Miltons” for refreshments, as they still do today.

Memories of the Milton’s Head

“I never went in the Milton’s Head, never. I wasn’t allowed to go in pubs because you didn’t go in pubs when you were in your teens in my day. It was just not the thing to be done. You could go to swing concerts and jazz concerts but you definitely couldn’t go in pubs and I never, ever went in that. I’ve been in it since and I don’t think it’s altered that much because it’s very much the same frontage.”

“Not a place where young ladies were expected to be seen. I’ve been in once and it was in years gone by. It did get a bit better. We knew the lady there, didn’t we, Effie, and we went in because she was there but I think once was enough. I still don’t go in there though I understand the food is very good.”

“Well this is the one known as the ‘blood tub’. It lost that name many moons ago but my dad always used to call it that and a lot of Buxton people did because apparently it was a bit of a dive in those days and there was a fight there most weekends and this is how it got its name ‘the blood tub’. It had some very strange characters in, I’ll go as far as saying that. I hope there’s nobody around now that used to fight there, but you never heard any bad stories, nothing really horrific, it was just they had too much to drink and had a good old fight there. Any of the older generation would remember, if you said ‘where’s the blood tub’, they would know it was the Milton’s Head.”

“It’s got a lead fire seal on the wall at the outside which was put on by the Fire Service, actually welded onto the wall, to show that you’d paid your taxes or your rates and if your house or your pub were to go up in flames, then they would come and put it out. If you hadn’t got the fire seal, then they weren’t obliged to do so, and that fire seal is still there to be seen now.”

You can experience Milton’s Head out in the Peak District or Derbyshire by visiting the location marked on the map below, or find it with the help of the Pocket Wonders app.