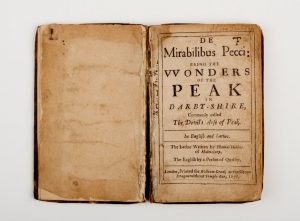 ‘Pool’s Hole’ was named as one of the ‘seven wonders of Derbyshire’ in Thomas Hobbes’ Latin poem De Mirabilibus Pecci (Wonders of the Peak), published in 1636.

This was followed in 1681 by The Wonders of the Peake, a satirical poem by Charles Cotton – who named Poole’s as the ‘first wonder of Derbyshire’.

Both poets were impressed by the natural wonder of Poole’s Cavern and it’s cave formations. Hobbes certainly felt the visit was worth his time.

One thing remain’d, but highly worth our view,
Pool’s hole, a cave so call’d and near us too.

Cotton describes the low crawl which was then required to enter the cave, and the view that met the travelers when they could finally stand again,

But having fiften paces crept or more,

Through pointed stones and dirt upon all four,

Although they were six times Goliah’s size,

There, looking upward, your astonish’d sight

Beholds the glory of the sparkling light

Th’ enamel’d Roof darts round about the place,

With so subduing, but ingrateful Rays,

Yet, there is also a Gothic side of Poole’s that these two scholars picked up on and exaggerated. This is not only due to the darkness within the cave,  but because of the story associated with its name, as an outlaw named Poole was thought to have used it as his hideout. Charles Cotton describes how “one poole an outlaw made his residence” and that only a ‘devil’ would be able to live there. Hobbes writes how “A monstrous, horrid, shapeless den appears”.

The poets also have some sage advice for the travelers who might follow in their footsteps. Hobbes, for instance, reminds us that as much as some cave formations may resemble food, they are in fact inedible…

This Cave by Gorgon with her snaky hair

You’d think was first posset; so all things there

Turn’d into Stone for nothing does appear

That is not Rock, what from the ceiling high

Will scarce yield to the teeth; stone they both

Take a peek inside

Read The Wonders of the Peake, by Charles Cotton

You can experience The Wonders of the Peak: Poole’s Cavern out in the Peak District or Derbyshire by visiting the location marked on the map below, or find it with the help of the Pocket Wonders app.