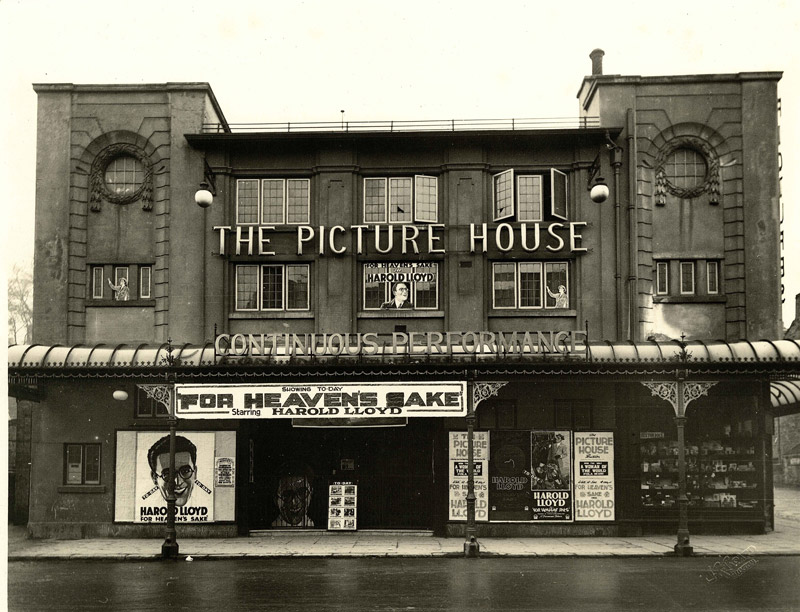 Although there is no date to accompany this image, the film showing is “For Heaven’s Sake” starring Harold Lloyd which came out in 1926 and we can therefore assume this photograph was taken around then. Harold Lloyd was a huge star in the 20s, making over 200 films and ranking alongside Charlie Chaplin and Buster Keaton. This show probably would have been a crowd puller.

In 1937, the Picture House was replaced by the art deco style Spa Cinema with an extra 200 seats. It competed with Buxton Opera House, which was a cinema at the time. The Spa Cinema closed around 1963. The building continued as a cinema and bingo hall until it was eventually demolished around 1986.

The Picture House was originally built on the site of the Swedish Gymnasium. This postcard shows it in 1912.

Memories of The Picture House and Spa Cinema

“It’s where we did a lot of our courting. A lot of happy memories”

“Oh, very happy memories. As long as I got my money to go to the Saturday cinema, it was wonderful and as soon as the film started, there was the biggest cheer went up, and I can remember, I don’t know if you can, that if it was full, and it very often was on a Saturday morning, you could sit on the floor, you could sit in the aisles and we used to shout and shout and shout when the good guys won and the bad guys came in again. It was just wonderful. In the interval everybody ran for an ice cream and as soon as the film started again, you’d go and sit in your place, whether it be on the floor or on a seat. Mr Parker was the manager there, Bob Parker, and he always was outside the cinema – that’s not for the children’s one in the mornings, but in the evenings and always had a suit on and dickie bow – very smart chappie.”

“Robert Parker was the manager there at the time. We went in there when Bill Haley and the Comets first started kicking up the American rock and roll and they showed the film there. It was an absolute riot ‘cos everybody got up and was dancing in the aisle ways and old Bob with his attendant on the door, he’d say “Right you lot, out!” and all this sort of thing, but we just sat down.”

“The interior of the Spa Cinema was very classy. It had, I don’t know how you describe these kind of ruffled curtains, they were lit in various colours and as the show began, these curtains would lift up. It was quite elaborate.”

“Well to be quite honest, I remember my mother taking me in. There was something she wanted to see and it upset me as a small boy and I cried and I had to be taken out, I remember that.”

“The picture that I have in front of me is the Picture House as it was in 1926. This particular one was only actually built in 1916 so it is only 10 years old in this photograph, but prior to that this site had the Swedish Gymnasium which was a kind of an iron and glass building – very elaborate. I mean, I don’t know exactly what went off there other than being a gymnasium but that’s what was there before that. This Picture House only stayed like that for about 30 years and in about 1936 it was rebuilt as the Spa Cinema which had an art deco frontage and an art deco interior. I remember this very clearly because as a child I used to go there every Saturday to the Saturday  morning pictures and there you could see things like cartoons and Laurel and Hardy and Flash Gordon and all that kind of thing. Entrance fee was sixpence – six old pence ie two and a half new pence  – and we used to look forward greatly to this. Just across the other side of Holker  Road on corner was a sweet shop so usually my parents would give me a shilling, so sixpence would go sixpence would go into the sweet shop and sixpence would go into the Spa Cinema.”

You can experience The Picture House out in the Peak District or Derbyshire by visiting the location marked on the map below, or find it with the help of the Pocket Wonders app.