In 1979 a hoard of coins was uncovered during restoration work to the Minerals Baths in Buxton. The coins reflected over 300 years of Roman history – and with it the story of Roman Buxton. 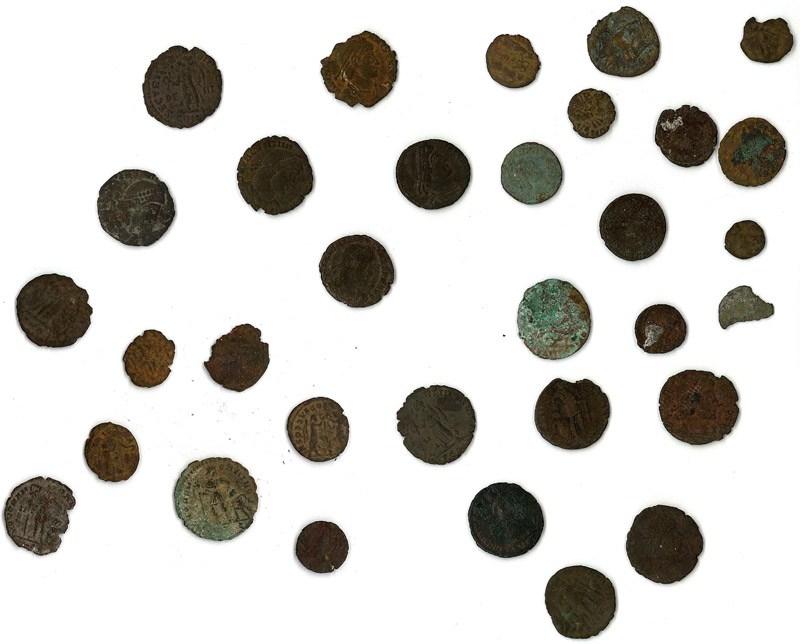 Coins were thrown into the sacred waters as offerings to the Gods. They were likely intended to bring good luck or grant particular wishes. It may be that the waters were cleared out periodically, and that the coins discovered are those that were missed down in a crevice at the bottom of the springs.

By examining the emperor on each coin, and out how worn it is, we are able to work out approximately when it was thrown into the waters. This shows that the offerings continued for over 300 years, starting within just a few decades from the Roman invasion in 43 CE, and running all the way up to the withdrawal of the legions in 410 CE.

The graph below plots when coins in the hoard may have been thrown into the waters at Buxton. The blue line plots the earliest date that the coins could have been deposited based on their date of issue. The red line takes into account wear to the coins, giving a spread of possible dates.

Many of the peaks and troughs the graph seem to correspond to notable events in the history of Roman Britain. For example, a peak just before 100 CE may suggest a period of peace following the conquering of northern England. A period of relative inactivity between 200-250 CE follows fragmentation and unrest in the empire.

Most of the coins date to the late Romano-British period. Peaks in activity seem to follow the recovery of Britain by Constantius in 296 CE , and a second period of calm at around 375 CE when order was restored following invasions by Picts, Scots, Franks and Saxons.

You can experience The Secrets of the Buxton Coin Hoard out in the Peak District or Derbyshire by visiting the location marked on the map below, or find it with the help of the Pocket Wonders app.

The objects below can be found in the Wonders of the Peak exhibition. Each has a connection to The Secrets of the Buxton Coin Hoard.