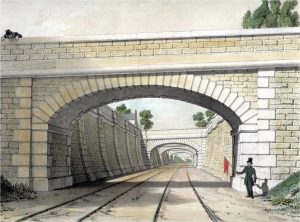 The first time a railway was built through the middle of a town. George Stephenson, the pioneer of railways and steam trains, engineered this route through Belper. In the 1840s this was the only route for trains to York and the North-East from London.

Belper developed rapidly as an industrial town from the 1770s and blocked the planned route for the railway along the valley. George Benson Strutt did not want the line to wreck his mills or upset the flow of water in the river that powered them. Stephenson’s solution still has the eleven original bridges that he built to carry the roads that crossed the route at the time.

The massive stone walls that you can see were built so that the cutting was narrower than it would have been with bare earth, as is the case in the station area. This saved many houses from demolition.

Compare the print with the view from the end of the platform today. Belper Station was moved here in 1878 from the south end of town.

This is now the main line from London to Sheffield with high speed trains as well as the Derwent Valley line service and freight trains.

You can experience Trains through the town centre out in the Peak District or Derbyshire by visiting the location marked on the map below, or find it with the help of the Pocket Wonders app.