This small wooden bridge was built in the early 1970s when the whole of The Torrs was reimagined as a “riverside park”. It is named after Dr Millward who was the chief proponent of the ambitious plan.

Before Dr Millward and his team started campaigning in the 1960s, the entire complex of mills and bridges had fallen into such a terrible state of ruin and pollution that the whole gorge was effectively closed.

Long before then, the leat water continued its journey over the River Sett (below) via an aqueduct and on into Torr Mill. This is not to be confused with the huge Torr Vale Mill we saw from above, though it was just as big.

END_OF_DOCUMENT_TOKEN_TO_BE_REPLACED

The Smedley family joined the move in the Derwent Valley towards the production of finished garments, rather than just fabric and thread. The Jay became a reliable symbol of luxury underwear, and ‘Long John’s’ undoubtedly originate from these factories. The industrial revolution marked the start of the growth of branding. Think about the brands you wear today- they are often more than just a mark of ownership and quality: what do they say about your identity?

END_OF_DOCUMENT_TOKEN_TO_BE_REPLACED 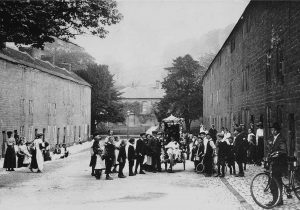 So called because dad would be weaving on the top floor whilst the women and children went to work for Arkwright in his mill over the way. The family would live on the bottom two floors and the top floor with its large windows gave a space for dad to work.

The family were heavily reliant on Arkwright but dad wasn’t working for him, dad bought cotton from Arkwright and paid rent for his house and workshop to Arkwright! Does that sound fair? Those fortunate enough to live in these cottages certainly felt pretty lucky as Arkwright was the first industrialist to build homes for his workers and whilst we might be surprised at some of the ways he treated them he was actually pretty good for the time!

Can you see the girl in the cart with flowers on it? Moving here to be part of the new community meant lots of opportunities to celebrate together such as the procession showed here.

This is the Torrs’ star tourist attraction: the Millennium Walkway. Its long sweep of shining steel takes us over one of the noisiest of the Goyt’s weirs, at a dizzying height. It’s an inspired way of linking the riverside park with the trains at New Mills Central Station and Torr Vale Mill.

The vast edifice of Torr Vale Mill, just across the river, began life as a water-powered cotton mill in the 1780s. It was converted first to steam, then to electricity and spun its last yarn in 2000.

The oldest section of the building faces us, with its typically Georgian rectangular windows. The former mill race passed through the stone arch just below it, to the right.

END_OF_DOCUMENT_TOKEN_TO_BE_REPLACED

Superstition was rife in Peak District villages during the late 17th century. Here in Wincle, when local man Robert Hall died and the cause of death wasn’t obvious,  people were quick to blame Mary Bagueley of Wildboarclough, three miles from Robert’s cottage. Mary seemed to have an unusual affinity for the frogs that lived in the stream outside her cottage in Wildboarclough because she spent a good deal of time in their company; and there was rumoured to be bad blood between her and Robert, though she was known to have visited him three or four times in the days and weeks before he died.

Mary was arrested by the parish constables and taken before the Assize at Chester. The case hinged on the little elm-wood box of dried herbs that Mary admitted to having left in Robert’s cottage. The herbalist summoned as witness couldn’t identify them, and Mary knew them by unfamiliar names. It was enough to prove that Mary was a witch. The verdict was inevitable. On the sixteenth of October 1675, Mary was convicted of killing Robert Hall of Wincle by magic, and on the following morning she was hanged. END_OF_DOCUMENT_TOKEN_TO_BE_REPLACED

We Homo sapiens haven’t always had the landscape to ourselves – we once rubbed shoulders with other hominids. On such cousin on the evolutionary tree were Neanderthals, who thrived throughout Europe and Asia for around 200,000 years.

An object found nearby in the limestone crags that overlook Ravensdale suggests they were even living here in what would become the Peak District.

This flint scraper was discovered in Ravencliffe Cave in the early 1900s. The 9cm long tool was knapped from a flake of blueish-grey flint. Archaeologists identified the flint knapping technique as Mousterian – a style closely associated with Neanderthals. The scraper is thought to date to around 40,000 years old, during the Middle Palaeolithic.

Neanderthals living in Derbyshire at this time were probably following herds of migrating animals. The bones of mammoth, woolly rhino and reindeer were also discovered at the cave – all potentially providing food, skins, bone and antler for Neanderthal hunters.