Historically, visitors to Buxton were encouraged to both bathe in the thermal waters (at 28 degrees Celsius, hardly even warm!) and to drink the water, which was doled out at St Anne’s Well by ‘well women’.

The picture above shows the water source inside the Pump Room, built in 1894. But the tradition of well women long predated this structure.

Dr Granville visited Buxton on his tour of English spas in 1839. While having some good things to say about Buxton, he objected to the ‘venerable’ attendants who handed out the drinking waters, and to the penny tip which was expected, since the well women received no other payment. He suggested the attendants should be younger (but not that they should be properly remunerated!).

END_OF_DOCUMENT_TOKEN_TO_BE_REPLACED

This landscape is dotted with burial mounds known as ‘barrows’. There is a large barrow built into the henge bank at Arbor Low, and another prominent barrow nearby to the south-east called Gib Hill. Scan the hilltops nearby and you will probably spot more distinctive ‘bumps’ on the horizon.

Many of these mounds were excavated in the 1800s by antiquarian Thomas Bateman, who dug hundreds of Peak District barrows.

Archaeologist John Barnett explains why Bateman excavated so many sites, and how his methods compare to today’s archaeologists:

You can read an audio transcription below.

END_OF_DOCUMENT_TOKEN_TO_BE_REPLACED

This monument marks the birthplace of noted artist Joseph Wright. Born at 28 Irongate in 1734, Wright is an internationally renowned artist, whose paintings and works on paper adorn the walls of major galleries the world over. Famed as a “painter of light” and for his association with key members of the intellectual movement known as the Enlightenment, he is now considered to be one of Britain’s most interesting and wide-ranging painters.

Wright’s contemporaries included pottery maker Josiah Wedgwood, factory owner Richard Arkwright and members of the Lunar Society, which brought together leading scientists, philosophers and industrialists of the period, such as Erasmus Darwin. Derby Museum and Art Gallery holds the most comprehensive collection of his works, including A Philosopher Giving that Lecture on an Orrery, in which a Lamp is put in the Place of the Sun, and An Alchymist.

END_OF_DOCUMENT_TOKEN_TO_BE_REPLACED

The Friends of Buxton Station have done quite a bit to make the place more cheerful and welcoming.  With the help of Buxton folk, they have installed several works of art including a huge ceramic mural of the Town Team’s “Buxton Illustrated Map.”  Measuring 3m by 2m, it sits on Platform 2.  This is a small part of it, designed by six local artists. 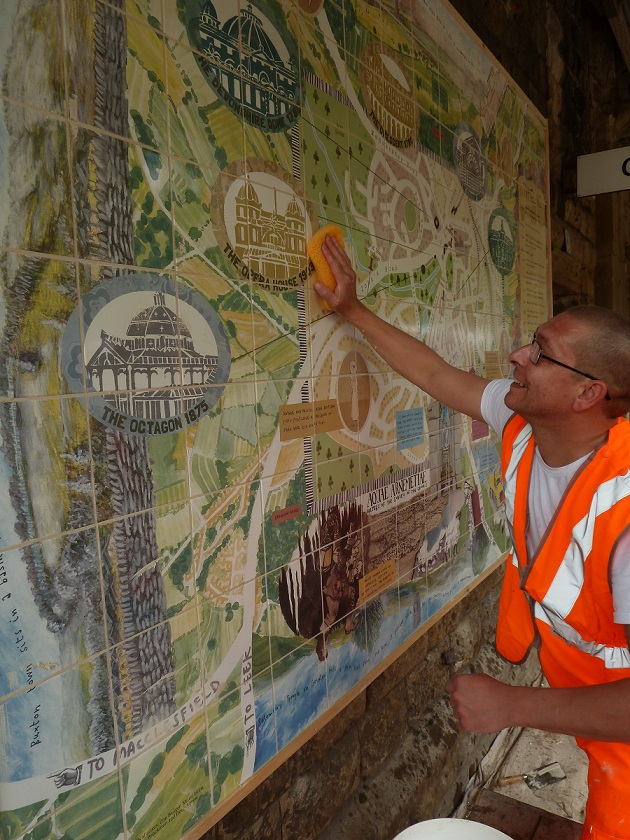 The Friends of Buxton Station have done quite a bit to make the place more cheerful and welcoming.  With the help of Buxton folk, they have installed several works of art including a statue made from salvaged scrap metal taken from the demolished Buxton Traction Maintenance Depot that used to sit diagonally opposite the main station building.  Made by Andy Hill (www.ferrassic-park.co.uk), it was named Joe by celebrated comedian Alexei Sayle in honour of his Dad, Joseph Henry – a lifelong Railway Guard.  Joe stands on Platform 2. 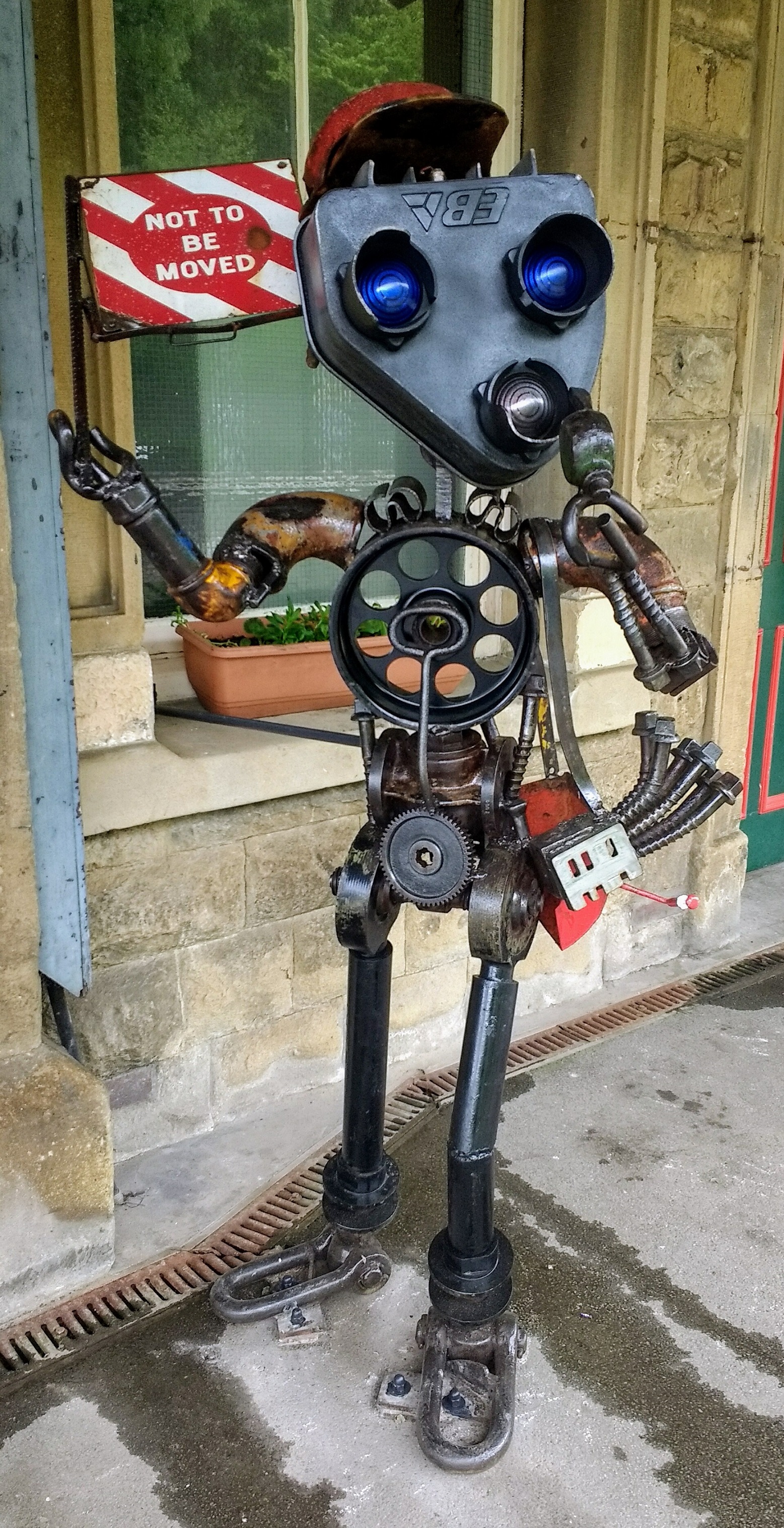 The Friends of Buxton Station have done quite a bit to make the place more cheerful and welcoming.  With the help of Buxton folk, they have installed several works of art including a townscape mural that runs for over 25 metres along Platform 2.  This is a small part of it, designed by 15-year old Carys Walters. 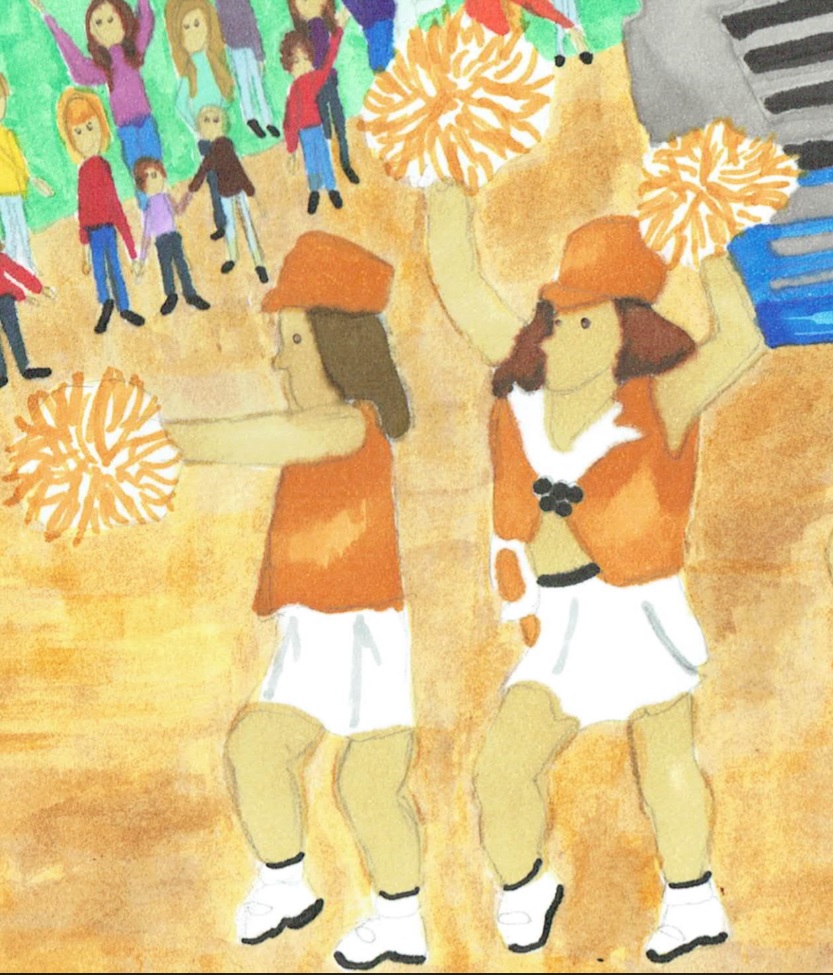