Long ago, a horseman was riding beside the River Dove on his way home to Hartington when he met a young woman, alone and distraught. When he asked her what was amiss she couldn’t answer; she merely sobbed. So he lifted her on to his horse, told her to grip his coat so she wouldn’t fall, and rode onwards, resolved to put her into the care of the vicar at Hartington.

Part way through the journey he turned to speak to her but she was no longer there. Alarmed, he turned his horse and rode back the way he’d come, but he found no sign of her, though it was a bright moonlit night. He called, but there was no answer.

In the end he was obliged to give up the search. The woman had disappeared. He never saw her again, or heard news of her.

The more familiar type of “phantom hitchhiker” story is to be found in various parts of the Peak District, as it is throughout most of the world.

Beware of walking the lanes and fields around Onecote under the light of the moon. You might meet a rider on a white horse, who is an omen of doom. He’s easy to recognise: he has no head.

Some local farmers and other residents have met the headless horseman and survived, but not surprisingly they were filled with horror. Joe Bowden was carried home to his farm by the decapitated rider and flung to the ground; he suffered no lasting physical injury but he died a few days later.

Who is the horseman? The ghost of a murdered peddler? A knight killed in battle? One of the four evil spirits cast out of Heaven and condemned to wander the earth? It would presumably be futile to ask him since having no head he could neither hear nor speak.

Attempts have been to exorcise the horseman, but there is no indication that they’ve succeeded.

For more about the horseman, see

There is good reason to believe that this strange gloomy cleft in the limestone, where the Back Wood slopes down to the valley of the River Dane, is the Green Chapel of Sir Gawain and the Green Knight. But there is something sinister in its atmosphere. Even in daylight you can sense that Lud’s Church is haunted – not only by the fearsome Bosley Boggart but also, perhaps, by the ghost of poor Alice, granddaughter of William de Ludauk, a Lollard captured by Lancastrian soldiers on this spot around 1400 CE. During the skirmish, Alice was killed. Moreover, mysterious ‘earth lights’ have been seen there. 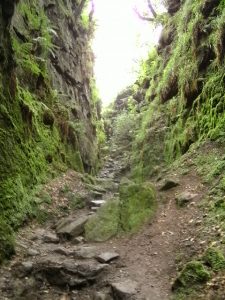 It is tempting to suppose that Lud’s Church was named because it was where de Ludauk and his fellow-Lollards held their services, but some authorities say the opposite is true. According to this viewpoint, Lud’s Church was named after the Celtic god Ludd, and de Ludauk took his name from the place, ‘auk’ being an Old English dialect word for temple.

Whatever the truth of the matter, Lud’s Church is an impressive landscape feature.

END_OF_DOCUMENT_TOKEN_TO_BE_REPLACED

In the village of Earl Sterndale stands a pub with a striking inn sign. 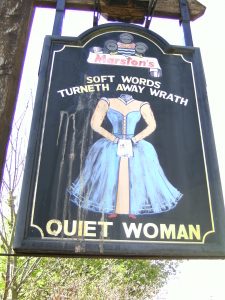 One version of the story behind this image concerns Chattering Charteris, a twelfth century scold who was never content unless she was nagging her publican husband and making his life a misery. When she began to nag and complain in her sleep, too, he could no longer tolerate her and cut off her head with an axe. So pleased were his neighbours by his decisive action that they collected money on his behalf, some of which was spent on a headstone for Chattering Charteris, with a warning to all nagging wives carved on it.

There are less gory versions of the tale, but this one is most popular with storytelling audiences. One can but wonder why the wife of a presumably drunken and disorderly innkeeper should feel a continual urge to nag her husband.

The motto on the inn sign, “Soft words turnety away wrath”, seems ironic.

In March 1815, Anthony Lingard of Litton was convicted at Derby Assises of the murder of Hannah Oliver, tollhouse keeper at Wardlow Mires. He was hanged at Derby Jail, and by order of the judge, Sir John Bailey, his body was gibbeted (hung on public display) here at Peter’s Stone in Cressbrookdale, half a mile from his home – and less than half a mile from the scene of his crime. This was the last gibbeting to take place in Derbyshire, and gave Peter’s Stone a new nickname – Gibbet Rock.

The gibbeting attracted many sightseers – booths and stalls were put up in order to accommodate them.

Anthony’s motive for murder was that in addition to being poor he had a pregnant girlfriend. Instrumental to his arrest and conviction was the pair of red shoes he’d stolen from his victim. The cordwainer who had made them, Samuel Marsden of Stoney Middleton, was able to identify them during the trial as Mrs Oliver’s.

END_OF_DOCUMENT_TOKEN_TO_BE_REPLACED 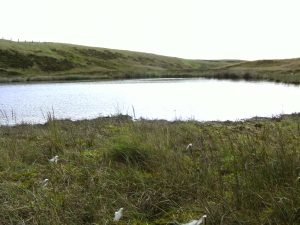 Blake Mere, high on Morridge a little over a mile from Longnor, is said to be bottomless. If you gaze upon its surface, especially around midnight, a mermaid will rise from the depths, combing her hair. She will call to you, but you’d be ill advised to walk to the water’s edge and approach her. There’s an old local rhyme:

She calls on you to greet her,

And if you go to meet her,

She ups and drags you down.

There have been many unexplained deaths at Blake Mere. Of course, you might not see the mermaid. Even at midnight, you might only see an arm rising from the middle of the water, beckoning you slowly and hypnotically.