The workshops at High Peak Junction are where the pioneers of transport built and repaired the waggons that ran on the Cromford and High Peak Railway. They are the oldest surviving railway workshops.

The Cromford Canal shipped goods in and out of the Valley to the South. The railway was an even more ambitious solution to create a direct line across the Pennines to Manchester. Originally there were no locomotives and the waggons were pulled by horse. Enormous steam engines (similar to the one that powered the Leawood Pump) moved the waggons up the inclines over the moors to over 1000 feet.

END_OF_DOCUMENT_TOKEN_TO_BE_REPLACED 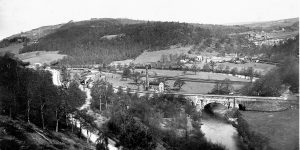 Cromford Canal opened in the 1790s. It was a vital transport connection from the mills and industrial villages to the rest of the country. Although it followed the river valley, it was challenging terrain for the canal engineers. Wigwell aqueduct is one of three between Cromford and Langley Mill. Boats also had to navigate 14 locks and four tunnels in the 14 miles. END_OF_DOCUMENT_TOKEN_TO_BE_REPLACED

At one time there was a rather grand house in Green Fairfield.

Built in 1896 for Samuel Swann Brittain and his Arabic wife Emma there are accounts of the grand house of Orient Lodge employing dairy staff, farm workers and servants.

The Brittains landscaped their estate from open farmland with formal gardens, mature trees from Ashwood Dale and overseas. There are tales of an orangery filled with exotic fruit trees, beautifully built stables for a stud farm and shippons with luxuriously tiled interiors.

However quarrying began at nearby Tunstead in 1929 and gradually expanded, moving closer to Orient Lodge.

By the mid 1930’s a family called Bingham owned the estate and had already sold part of the land to I.C.I.

Robert Bingham kept the house on until he died in 1977 before its inevitable sale to I.C.I.

All that remains now is an overgrown tree lined driveway leading to a great cliff edge to the huge Tunstead quarry.

Read more about the Brittains and the Binghams at Orient Lodge on our Buxton Museum and Art Gallery blog:

This area of the Peak District is renowned in Britain for extreme winder conditions. Bad snow fall closes roads and can isolate remote, rural communities.

Turn until the chapel is on your left and the road is behind you. Look up the farm track and compare it to this picture, taken up this track in 1962.

The winter of 1962/63 is sometimes referred to as the big freeze and was one of the coldest winters on record in the United Kingdom. Many farms in the Peak District had to have food parcels dropped off for them, trapped under up to eight feet of snow in places!

END_OF_DOCUMENT_TOKEN_TO_BE_REPLACED

We asked local people to share their memories and personal collections about the history of Hollinsclough. M.E. Parker kindly shared these images of Hollinsclough band who first formed in around 1920 practiced here at the Chapel Hall. The band are is active in the local area.

Stories and photos were collected from local people with the help of Harry Hitchen and the members of History Live.

This piece was contributed by Ian Gregory, a volunteer at Buxton Museum and Art Gallery

The Pavilion Gardens date from 1871 – 1875 and were a venue for live music and for eating out. The dome is known as the Octagon and is, unusually for the United Kingdom, one of several impressive domes and cupolas in the town.  It was built when Buxton was at the peak of its popularity as an inland resort.

I have scanned programmes of live music at the Pavilion Gardens. Many are for The Spa Orchestra of Buxton. These date from the 1940s and include summer seasons (May to September) and winter and Christmas concerts. There are, unsurprisingly, differences between live entertainment then and now but also parallels. The programmes are overwhelmingly Classical apart from a little Rodgers and Hammerstein and Irving Berlin. Many end with the National Anthem. There are names of composers now forgotten although many are still familiar.