END_OF_DOCUMENT_TOKEN_TO_BE_REPLACED

Ahead of you, up the track, lies Haddon Hall. The house is considered one of the best preserved examples of a Tudor hall. It has appeared in the films ‘The Princess Bride’ and the 2005 adaption of ‘Pride and Prejudice’ along with other productions.

The hall has long been popular, featuring in a series of engravings and prints from the 18th and 19th centuries.

The origins of the hall date to the eleventh century where it was occupied by William Peverel, possibly an illegitimate son of William the Conqueror, before passing to the ownership of the Avenells during the reign of Richard I. It was then occupied by the Vernon family in the 1200s where it remained until a scandal around the youngest daughter of Sir George Vernon who eloped with Sir John Manners (the second son of the first Earl of Rutland). Dorothy Vernon and John Manners then began the Manners family at Haddon Hall.

END_OF_DOCUMENT_TOKEN_TO_BE_REPLACED

The peaceful and picturesque market town of Bakewell sits along the River Wye and is the birth place of the famous ‘Bakewell Pudding’. Whilst there is a strong indication to support the presence of much earlier settlements, Bakewell was founded during the Anglo-Saxon period, along with neighbouring villages Tideswell and Eyam. An early variation of the name also appears in the Doomsday Book.

There is evidence of a Saxon church in Bakewell which dates to 920, but the present church dates to the twelfth century in a typical Norman style, of which only the front and west parts of the nave survive today. The rest of what you see before you now was built in the early thirteenth century, with an assortment of restoration taking place in the nineteenth century.

END_OF_DOCUMENT_TOKEN_TO_BE_REPLACED 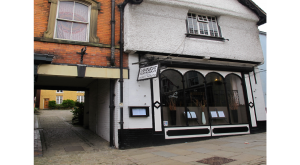 Alongside the Lamplight Restaurant is Tiger Yard, a good example of of an Ashbourne yard. A number of yards survive in Ashbourne and can be explored.  There were built on medieval burgage plots – narrow strips of land with a building at the front and a long croft (garden) behind. As the Town’s population expanded building space was short and parts of the medieval crofts were built on to form these yards containing workshops, storerooms and cottages.

Most yards were entered through a “tunnel” entrance and many had a public house at the entrance.  This yard was named after the Tiger Inn, now the Lamplight Restaurant, at its entrance.

END_OF_DOCUMENT_TOKEN_TO_BE_REPLACED 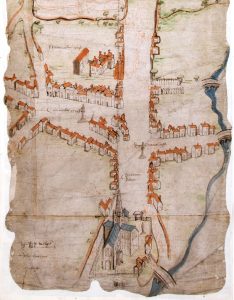 The earliest known plan of a Derbyshire town, this map is a bird’s eye view from St Oswald’s Church.  It was drawn for use in a dispute over land enclosures.  The original is held in the National Archives and the Surveyor is not known.

This section shows a small town built around a triangular market place with regular houses placed along the streets with burgage plots (medieval crofts) behind.  This town plan is still evident on the ground today.

Many houses follow an alternating front-on and side-on pattern still seen in the gingerbread cafe in St John’s Street and the Lamplight Restaurant in Victoria Square, which were both built before this map was drawn.

The Abbey public house, a recent use of a medieval building, the only substantial remains of the era of the long lost Augustinian Abbey.

Note the interesting plaque on the wall facing Darley Street.

In December 2001, the Derwent Valley Mills in Derbyshire was inscribed on the World Heritage List. This international designation confirms the outstanding importance of the area as the birthplace of the factory system where in the 18th Century water power was successfully harnessed for textile production.

Darley Abbey contains the most complete of any of the cotton factory sites within the Derwent Valley.

Find out more information about the history of Darley Abbey here.

You can also find out what else there is to see and do in Darley Abbey here.